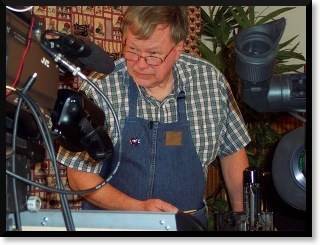 All of the content on this page is the intellectual property of Dave McCallum and is posted here with his permission. Additionally he continues to sell his books and DVDs. While we do sell his products here, this page’s contents still remain Dave’s, and we are happy to provide a space to share this with you.

David McCallum, the bestselling author of The Featherweight 221 and I, is an “artist turned quilter” whose photo-realistic drawings have won numerous awards throughout his native Pacific Northwest. Because he is partially colorblind, Dave worked in black and white, using both graphite, and pen and ink. He found the handling Dave McCallum posing and use of color baffling until he attended quilt shows with his wife, Sharon, and was made aware of quilting as an art form. He discovered that he could discern colors in fabrics that eluded him in his artwork, and he soon became an avid quilter.

Dave’s fascination with quilting and sewing machines led him into yet another creative adventure – restoring and maintaining classic machines. While restoring his mother’s treadle, he bought his first Singer Featherweight, and thus began a love affair with the sewing machine that is so cherished by quilters throughout the world. Dave became frustrated with the lack of information available on the subject of restoration for antique sewing machines. What little he did find was scattered, very cryptic, and lacking in details. As he researched, he developed classes designed to teach others how to maintain and restore their own machines.

The information he gathered far exceeded class handouts, and ultimately inspired the creation of his book, The Featherweight 221 and I. Dave retired in 2004 after 39 years in the workforce, but when The Featherweight 221 and I was published and immediately became a bestseller, he found himself self-employed – FeatherweightRX was born. Dave operated a limited repair service for vintage sewing machines but preferred instructing people on the care and maintenance of their own machines. Dave and Sharon began a decade of traveling and teaching Featherweight Maintenance Workshops throughout WA state. They also held classes in MT, ID, OR, TX, AZ and CA. It quickly became apparent that it would be impossible to respond to all of the teaching requests coming in from quilt shops across the country.

In 2008, Dave had a two-disc DVD professionally produced, aptly titled Those Fantastic Featherweights. The DVD is like having a private workshop with Dave and more. It has gained in popularity since its release, was created to be played in all regions, and is helping Featherweight owners in many parts of the world today. Dave became recognized in the industry as one of the foremost experts on the Singer Featherweight sewing machine and Featherweight RX continued to grow. In 2014, Dave and Sharon decided it really was time to retire.